Solving Mailtrap’s Error 550 (too many emails per second)

So today in my usual development job, I stumbled on an error 550 (too many emails per second) using Mailtrap because I’m sending a lot of emails at once (probably 50 in a second). This most probably won’t happen on your mail provider but sure Mailtrap did put a limit on this and that you can only send 3 emails per second. See below: 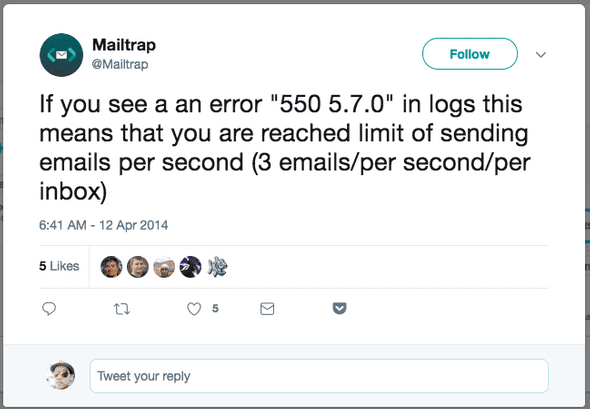 In order to solve this, we need to limit and only send 3 maximum per second or else we’ll risk getting our connection cut and the rest of the emails not being sent. I was using NodeMailer package on my NodeJS app and luckily this can be easily be done by using Pooled SMTP and additional options. Read this guide for more information.

So in createTransport code and options, limiting 3 per second would translate with the following options below:

That’s it folks. Hopefully you save yourself some time solving your way out that error 550 (too many emails sent) using Mailtrap.

Personal blog by Dorell James
I love you and coding!

Let me know your thoughts... 😊